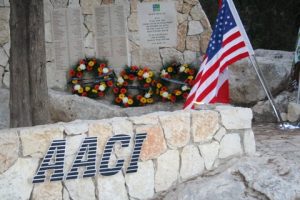 On the road from Tel Aviv to Jerusalem, near the vital pass of Shaar Hagai (View map) where fierce battles raged in 1948, stands a forest established by the Association of Americans and Canadians in Israel in conjunction with the Jewish National Fund.

The first trees were planted following the Six-Day War in 1967 to honor the memory of those olim from North America and members of their families who fell in Israel’s wars. The forest is a living memorial, an eternal link between the fallen fighters and the land they loved.  The scope has since been expanded to include those who fell in the pre-State days, as well as in terrorist attacks, including tourists and temporary residents.

It serves as a site of remembrance and reflection for Israelis and visitors alike.

Since before the establishment of the State, more than 300 American and Canadians have fallen in Israel’s wars, defensive actions, and terrorist attacks. Their sacrifice has preserved the State of Israel for the Jewish people.

The annual AACI Memorial Ceremony honors the memory of North Americans, or their immediate family members, who have died while in service to the State of Israel or as victims of terror.  The ceremony is held every fall at the AACI Memorial Site in the Rabin Forest near the Sha’ar HaGai junction.  At the site stands a stone Memorial Wall on which are inscribed the names of more than 350 people, the earliest of which go back to the 1920’s.

Our featured speaker will be Esther Lapian who has taught teachers how to teach Bible and Jewish Studies for several decades, both in Israel and abroad. She recently retired from the Kerem Institute for Teacher Education in Jerusalem. Currently Esther teaches Bible in The Schechter Institute’s Adult Education Program. In addition, she runs an Educational Consulting Service that helps Anglos navigate the Israeli school system. Esther resides in Jerusalem with husband Zvi. She is a proud mother and grandmother. The title of her talk will be: On Mourning and Remembrance: 3 Different Tales from the Bible

Click here to view a virtual montage of previous ceremonies

AACI acknowledges the contributions of  PNAI, Jewish Federation of Baltimore and Keren Milgot of the Association of Americans & Canadians in Israel – Jerusalem branch # 580015451 in support of the Memorial Ceremony.

Directions to the site: Map